For someone for the west, India provides an authentic adventure - stimulating, absorbing, daunting, sometimes moving and shocking. Here is one of the world's great dramas; an ancient, vast and crowded land committed to the most formidably challenging exercise in mass democracy. It is a spectacle in which hope, pride, paradox and uncertainty mingle and struggle. It is conducted on the whole, and to India's credit in the open. The lasting memories of the land are hospitality, kindness, good humor and generosity. Here is a society of over a 1000 million people, growing by a million a month, divided and united by language, caste, religion and regional loyalties. It has often been described as a functioning anarchy; and it is in many ways an amiable one, of marvelous fluidity and tolerance. Indeed, the true Indian motif is not the Taj Mahal, the elephant or the patient peasant behind the ox drawn plough. It is the crowd, the ocean of faces in the land of multitudes, endlessly stirring, pushing and moving. It is in this human circulation that one sees India's color, variety, busyness, and, senses also its power, vitality and grandeur.

After breakfast, embark on a city tour of New Delhi. Our tour includes a visit to the Qutab Minar - 72 meters high and one of the most perfect towers in the Persian world. The Iron Pillar which has survived the vagaries of weather for over 1500 years. Then, we will continue our expedition with a drive to the Lutyens Delhi which is considered to be the corridors of power and serenity. Our tour also includes a drive pass through the Rashtrapati Bhawan, Parliament House as well a stop at India Gate.

Next, we will continue our journey with a visit to the Humayun’s Tomb (1586), built by the Emperor’s widow Hamida Banu Begam, also known as Haji Begam, and commenced the construction of his tomb in 1569, fourteen years after his death.

Our tour also includes a visit to the Isa Khan’s Tomb complex located adjacent to Humayun’s Tomb and is the resting place of Isa Khan Niyazi, a noble of influence at the court of Sher Shah Suri.

We will be also visiting the Safdarjung Tomb. Then, we will make our way to the Agrasen Ki Baoli (Beautifully Sculpted Step Well) - a water reservoir or a step well that is known for its heritage value. Indeed, the builders were way ahead of time when creating this architectural marvel that dealt with sorting out the water problem.

The highlight of this tour would be a ride on cycle rickshaws. Now these are 3-wheel cycles with a sofa seat at the back. The Rickshawala (Rickshaw driver) sits on a small cushion in the front and two passengers on the sofa seat behind. This is a remarkable way to explore and picture the hustle and bustle as well as the color of the narrow winding streets bursting with people and pavement shops selling wares of all description - including a laughing set of dentures. The ride would be accompanied by peals of laughter both from the passengers as well as the onlookers. (Pleases do accept that some shops are closed on Sundays)

Early morning, transfer to the airport to board your flight to Ahmedabad

Meeting & assistance upon arrival at Ahmedabad, we will drive to Dungarpur

Upon arrival, check into the Udai Bilas Palace

The history of Udai Bilas Palace, Dungarpur, Rajasthan dates from the mid-19th century, when Maharawal Udai Singhji-II, a great patron of art and architecture built a wing of bluish grey local stone " Pareva" overlooking the lake and the " Ek Thambia Mahal," featuring intricate sculptured pillars and panels, ornate balconies, balustrades, bracketed windows, arches and frieze of marble carvings, a veritable marvel of Rajput architecture. The Udai Bilas Palace was enlarged in 1940 by Maharawal Laxman Singhji, who built three new wings around the " Ek Thambia Mahal" (Literally one- pillared Palace) and thus created the famous " courtyard of the palace. The result is an architectural expression exquisitely detailed. Still the royal residence, the Palace offers accommodation in the houseguest tradition with seventeen spacious and lavishly appointed bedrooms. No two rooms are alike; each room enchants with its own personality, spaciousness and modern comforts and offers a unique experience. The Furnishings are mostly from the 20th century art-deco style, marble bathrooms with English fixtures and running hot and cold water. Meals are served either in the banquet hall, which displays crystal chandeliers, or in the more intimate family dining room. Continental or Chinese dishes are also served.

The district is the stronghold of Bheels, a tribe whose history of occupancy in the Aravalli Range is said to date back to 4000 B.C. They are one of the oldest and most primitive tribes of the world. This morning we will visit some of these unspoiled Bheel hamlets in and around the town. We will witness and photograph age-old tribal lifestyles and customs handed down over the centuries. You would have an opportunity to meet villagers who have never seen white people!! Say hello to people, allow them to get used to you and then, you may go ahead with your pictures. You would soon end up as the pied piper followed by scores of noisy and happy children!!! 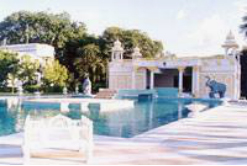 We return to our hotel by mid morning to enjoy the destination at leisure. Udai Bilas Palace is a round-the-year paradise for bird watchers.

The cooler months from mid October to February are the best to see winter migratory birds when birds can be observed in attractive plumage. One can see from the Palace itself at remarkably close range egrets, night and pond herons, white necked and painted storks, coots and winter or resident ducks among others, depending on the season of your visit. Birds are also plentiful in the surrounding woodlands where one can hope to see the Grey Hornbill, Gray Partridge, Green Pigeon, and Peafowl, Peacocks, Paradise flycatcher and the Golden backed woodpecker, to name a few representative species. You may proceed on a leisurely walk around the lake or heir boat for a special boat trip on the lake as well as a gentle trek through the forests so that the nature lover in you is able to enjoy the beauty of the place and are able to get a close look at the bird life.

Late afternoon we visit the ancient fortified ruins of the Old Fort. Besides fine panoramic view of the ancient town of Dungarpur the fort has well preserved examples of natural colour paintings and incredible art and architecture.

After breakfast, we drive to Udaipur.

Welcome to Udaipur, the famed “City of sunrise”. Founded in 1567 by Maharana Udai Singh, from the lineage of the legendary Sisodias of Mewar - the decedents of the sun God. A city where the sun truly never set, where tradition and a strict code of heroism were happily united with a love of fine living. A city that has come to be an oasis of romance in the warrior state of Rajasthan

Upon arrival, check into Madri Haveli

Evening we enjoy a boat cruise on the serene and beautiful Lake Pichola. The island palace on the Lake called Jagmandir Palace is quite fascinating. The Palace provided inspirations and ideas to the builder of the Taj Mahal. The banks of the lake provide interesting glimpses of the daily bathing and the laundry that takes place here. Looking across the lake, with the city and its great palace rising up behind the island palace, is a scene of rare beauty.

After breakfast, we proceed on a tour of this "Lake City". Udaipur is a cool oasis in the dry heart of Rajasthan. It is probably the most romantic city in a state where every city has some romantic or exotic tale to tell. The huge city palace towering over the Lake Pichola is the largest palace complex in Rajasthan. Though it is a conglomeration of buildings built by successive rulers, it manages to retain a surprising uniformity of design and affords very fine view of the lake and the city from the upper terraces. The Jagadish temple next to the city palace enshrines a black stone image of Lord Vishnu and his vehicle- a mighty bird called garuda - in a brass image. The temple is a very fine example of Indo-Aryan Art. 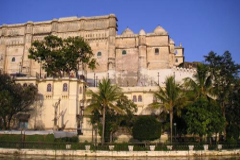 This afternoon, we explore the bustling bylanes of Udaipur which have artisans practicing their traditional crafts handed down to them by their elders. Khari printers do decorative floral patterns in gold and silver on plain or printed fabric. Block printers print various designs and patterns in different colours with the help of wooden blocks. You’ll also find artisans carving furniture, making puppets and traditional wooden toys. Along with engraving and embossing on brass, silver, jewellery, copper and even pottery, Meenakari is a specialty of this region. Udaipur also specializes in stone carving, especially in marble and sandstone, with artisans working hard at chiseling their finest filigree work. Colour as usual plays an important role in the life of Udaipur as in Rajasthan. It is wonderfully evident in ghagharas (long flowing skirts), cholis (blouses), and odhnis (long scarves) of the women as well as the turbans of the men.