For someone for the West, India provides an authentic adventure - stimulating, absorbing, daunting, sometimes moving and shocking. Here is one of the world's great dramas; an ancient, vast and crowded land committed to the most formidably challenging exercise in mass democracy. It is a spectacle in which hope, pride, paradox and uncertainty mingle and struggle. It is conducted on the whole, and to India's credit in the open. The lasting memories of the land are hospitality, kindness, good humour and generosity. Here is a society of over a 1000 million people, growing by a million a month, divided and united by language, caste, religion and regional loyalties. It has often been described as a functioning anarchy; and it is in many ways an amiable one, of marvellous fluidity and tolerance. Indeed, the true Indian motif is not the Taj Mahal, the elephant or the patient peasant behind the ox drawn plough. It is the crowd, the ocean of faces in the land of multitudes, endlessly stirring, pushing and moving. It is in this human circulation that one sees India's colour, variety, busyness, and, senses also its power, vitality and grandeur.

After breakfast, ride out to the obscure village of Neemrana which is dominated by the majestic Neemrana Fort, which is India's oldest heritage resort. Situated on a majestic plateau, concealed in a horseshoe formation of the billion-year-old Aravalli ranges, Neemrana fort Palace Heritage Hotel has 40 air-conditioned rooms. Each room has its own unique character and history. On the basis of theme the rooms have been named as the Malabar room, Barsat Mahal, Chandra Mahal, Mata Mahal, Surya Mahal, Gopi Mahal and the Sheesh Mahal.

This evening, we embark upon a heritage walk through the pristine town of Neemrana. The walk brings to the visitor the ethnic heritage of the region preserved and sustained over centuries. We have opportunities to witness traditional homes, fields and places of worship. The local temple would be a fascinating venue. We observe pilgrims and devotees arrive to pay their respects in traditional dresses. We will also have opportunities of observing the traditional crafts of Neemrana. A special mention would be a visit to homes that make fascinating cotton runners (durries) using traditional hand looms. Interesting and intricate patterns in different colours are made here. The other local craft would be viewed when we reach the potters village. Hand made pottery of various shapes and utilities are made here. We get to see potters working on their wheels making shapes from clay mounds. We also could see the intricate painting and designing perform on these clay articles. Another fascinating exploration would be visit to the jeweler’s compound. Here, we see the smelting of silver and the making of fascinating silver jewelry. We do get a chance to interact with the natives through the interpretation of our guide. The simplicity and the hospitality with which, the local deals with you would leave an indelible mark upon your heart. The walk continues to the famous step well of Neemrana. This was used by the royal family in the past. About hundred steps lead to the well, and, the stepwell has a grand entrance with ancient steps that meandered nine stories below the ground. Historically, this was used as a caravanserai by tired travelers as also for simply storing water. We will also witness the residence of the Royal family on our journey.

Following the walk, we will return back to our hotel.

After breakfast we will drive to Jaipur

Upon arrival, check into Jas Vilas. 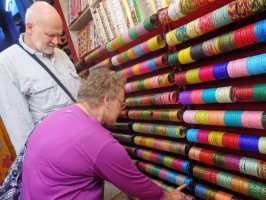 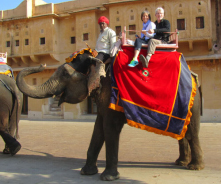 Morning we drive to Agra, stopping at deserted Capital City of Fatehpur Sikri. This abandoned capital of the Mughals is a perfectly preserved city at the height of the empire’s splendour. The city divided into religious and secular parts has interesting well-sculpted buildings. From here we continue our ride to Agra

Upon arrival in Agra, check into Crystal Sarovar 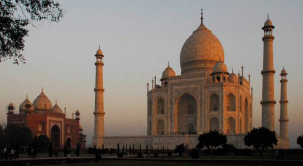 Agra is the city of the Taj Mahal, perhaps the most photographed monument in the world. However, there is a degree of enigma about the Taj. Once you hear about a building so much and once you see so many pictures of a building your expectations are real high; and this is the enigma about the Taj Mahal. No matter how many pictures you have seen or no matter how high your expectations are the Taj never lets you down - the unparalleled glory and beauty of the building surpasses beyond all human imaginations. At sun set we visit the Taj Mahal to witness this spectacular monument built for love. Besides perfect symmetry in every aspect of its construction, the inlay work of semi precious stones into marble in pietra dura style is absolutely remarkable.