Jordan is a country of mountains, beaches, castles and ancient churches, with an urban population and a rich culture. It is safe, comfortable and welcoming – and by far the region’s most rewarding destination.

Upon arrival, we will meet you at the airport and transfer you to your hotel in Amman for the start of your trip. The local representative will help you settle in and introduce you to the local area.
Overnight in Amman 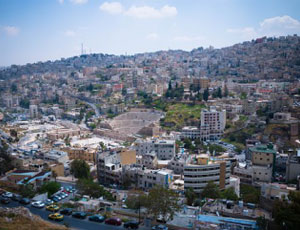 Your first full day of our Jordan tour starts after breakfast, as we make our way to Jordan's famous 'desert castles'. Jordan's desert castles are located on the old trade routes and still houses some of its ancient remnants, including frescoes, bath houses and wells. We'll explore the desert castles of Qasr al-Kharrana, Qasr Azraq and Qasr Amra before we head back to Amman for lunch at a local eatery, with falafel and hummus on the menu.
After lunch, we'll explore downtown Amman on foot, visiting the impressive Roman Amphitheatre, the Jordan Folklore Museum as well as the Citadel. We will be also visiting some of Amman's busy markets, savoring Knafeh - a tasty sweet - while our guide taught us some basic Arabic greetings and phrases to use during our Jordan tour.
Overnight in Amman 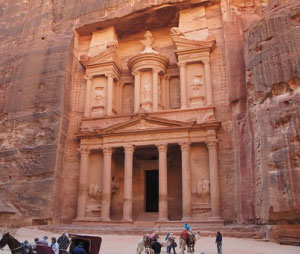 Today, we leave Amman, and head north to the ancient city of Jerash - one of the largest and well-preserved Greco-Roman cities outside of Europe. Here we'll visit the Forum, explore its Roman colonnaded streets, the Nymphaeum and the Temple of Artemis. From Jerash, we then make our way to Ajloun Castle, built in the 12th century and extended in the 13th. It also served as the base for Saladin's Arab forces when he defeated the Crusaders in the 12th century. The countryside of the Ajloun Forest Reserve around the castle is picturesque and green and a popular place for avid hikers, with its hills, mountains and forests just waiting to be explored.
After Ajloun Castle, we head to the village of Rasoun to meet our Homestay hosts for the night. After settling in and being shown through the village, we'll walk through hills covered with scrub and forest to see some Bronze Age Dolmens - which are megalithic tombs formed by placing a huge stone slab atop two or more standing stones.
Later, we will return to our Homestay in Rasoun this evening, where we'll be treated to a home-cooked traditional meal.
Overnight in Rasoun Village 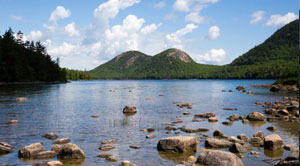 We say goodbye to our Jordanian host, after a shared breakfast and head south to Madaba, where we will marvel at the Byzantine mosaics and the 'Madaba Map' - which is the oldest preserved map of the Holy Land. From Madaba, we will then make our way to Mount Nebo where on a clear day, which is most of the time, you get surreal views towards Jericho and beyond.
After a tasty lunch, we'll make our way down to our resort right on the banks of the Dead Sea, where you have some free time to swim - or rather float - in its incredibly salty waters and to relax by the hotel pool. Don't forget a newspaper or magazine for your iconic Dead Sea photo!
Overnight in Dead Sea - Sweimeh 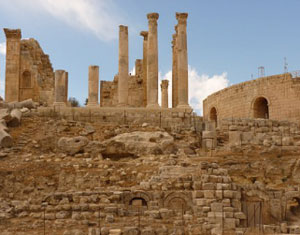 We start today with a walk through the breathtaking canyons and gorges of Wadi Mujib, at 410 meters below sea level, the lowest nature reserve on the planet. During the summer months of April to October, we'll take the Siq Trail along the course of the river between towering sandstone cliffs to the base of a large waterfall. The gorge may contain pools deep enough for swimming and you should expect to get a bit wet along the way. In the winter months of November to March, we'll take the Ibex trail along various dry wadis with great views of the Dead Sea to the Raddas Ranger Station where we'll look out for Nubian Ibex. We'll also witness the famous rock 'statue' of Lot's wife before returning to the reserve entrance. We'll then drive along the Dead Sea coast and up through the mountains to Petra. We'll take a break en-route at Lot's Cave, for a local village lunch, and at the huge crusader castle at Shobak. You have the option for a spectacular and atmospheric introduction to Petra tonight, with the Petra by Night tour. Here you walk through the Siq to the Treasury, the whole way being atmospherically lit up by thousands of candles.
Overnight in Petra 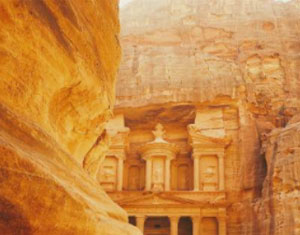 We start our exploration of the Rose Red city of Petra, now one of the Modern 7 Wonders of the World, with a walk through the winding Siq to the magnificent Treasury. The guide will explain the fascinating history of the site and the Nabatean people who built it, and we'll explore several caves and tombs. You'll then have time to explore further, perhaps hiking up to the huge Monastery, carved out of the cliffs overlooking the Jordan Valley, or walking up to the High Place of Sacrifice.
Late in the afternoon, we head into the spectacular desert scenery of Wadi Rum for a night under the stars enjoying the hospitality of the Bedouins. We stay in a comfortable camp with a great remote location between the sand dunes and the rocky cliffs, well away from the chaos as well as its side-effects. You can sleep in your traditional goat hair tent, with a proper bed and all bedding provided, or take a sleeping bag and find a secluded location to sleep outside under the stars.
Overnight in Wadi Rum 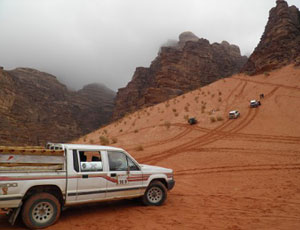 Day 07: Jeep Safari, Bedouin experience at Wadi Rum and back to Amman

After breakfast in the camp, we take a jeep safari through the sands and beneath the towering 'jebels' of Wadi Rum, stopping to climb sand dunes and to see some of the strange rock formations, including a spectacular rock bridge. We'll also do some local activities inspired by the Bedouin traditions, walking with a local shepherd with his sheep and goats to a Bedouin tent where we'll participate in making lunch. Finally, after really getting a feel for nomadic Bedouin life, we return by jeep to our camp and then drive north on the Desert Highway back to Amman.
This evening, we will walk out to a coffee shop or cafe near our hotel in Downtown Amman to enjoy a Shisha, a game of backgammon and to reminisce on our Jordan tour.
Overnight in Amman

Our representative will escort you to the international airport for your onward flight towards the next destination.

PS: The proposed is only a sample schedule and not written on stone. We would strongly encourage you to share with us your added travel needs so that we could customize the vacation further to align better with your requirements.