Our friends keep asking us how we liked our trip. I tell them that it was an education in culture, history and religion. I thought India was overwhelming at times, but found it colorful, spiritual and fascinating. It’s the kind of trip that you’ll be thinking about years later – As Observed by Ms. Joan Landers (A Former Guest Of Trinetra Tours)

Early evening, guests are expected to assemble at Chhatrapati Shivaji Terminus at 1530 hours, and complete their registration and check-in formalities. Enjoy the royal and traditional Indian welcome by the staff followed by a refreshing drink. Later, you are taken to your respective cabins. Settle and relax as the Deccan Odyssey as the train leaves for Bijapur in Karnataka. Dinner and overnight stay.
Overnight at Deccan Odessey 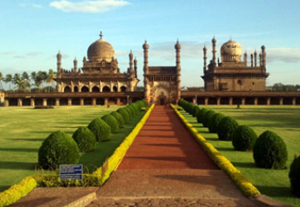 Today morning enjoy your breakfast, as the luxury train rolls into Bijapur. Established by Kalyani Chalukyas between 10th and 11th centuries, Bijapur is a popular city in Karnataka. It is the historic capital of Sultans of Deccan. When Bijapur was under the support of Adil Shah dynasty, the city was one among the renowned cities of the country surpassing great cities like that of Agra and Delhi. In fact, with the generous support of Adil Shahi Sultans, Bijapur was majorly flocked by scholars, poets, painters, dancers, calligraphers, musicians and Sufi saints. Later, the place was also titled as the 'Palmyra of the Deccan'. Begin your trip with a visit to the first attraction, Gol Gumbaz; the second largest tomb in the world and mausoleum of Adil Shah, the Sultan of Bijapur. As the name suggests, the Gol Gumbaz is a round dome, the structure of the dome celebrates the success of Deccan architecture. The dome constitutes of a circular gallery, which has an amazing aspect of echoing, every little murmur. Later, you proceed ahead to Jumma Masjid (one of the first mosques of India), Malik-e-Maidan (the largest medieval canon in the world), Mehtar Mahal (it is a 17th century ornamental entrance to a mosque), Ibrahim Rouza (one of the Islamic monuments comprising of a 24 m high minarets). Get back to the comforts of Deccan Odyssey for lunch. While you savor delicious lunch, enjoy the striking passing landscape from your cabins. The luxury train further heads to Aihole and Pattadakal. Dinner and night stay onboard.
Overnight at Deccan Odessey

Third day is set out to explore the holy shrines and age-old attractions of Aihole and Pattadakal. Here, you get to see temples built by Chalukyan kings. Proceed to Pattadakal, which boasts of a mélange of South Indian (Dravidian) and North Indian (Nagara) construction styles. Return back to relish lunch onboard. After lunch, you can opt for a short trip to impressive weaving village of Guledgudda, where you can see hand and power looms of Ilkal and Khan. Get familiarize with the weaving process. If not this, you can enjoy sightseeing at Badami, its rock-cut caves and beautifully sculptured temples. Dinner and night stay onboard Deccan Odyssey and continue your journey to Hampi.
Overnight at Deccan Odessey 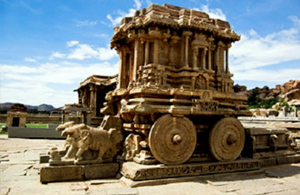 Today morning, have your breakfast as the train reaches Hospet. Visit the well-known World Heritage Site- Hampi, which is extremely popular for its brilliant constructions of ancient monuments. First you visit the most important attraction of Hampi, Narasimha statue. Later, you head to Mustard Ganesh. Here, you can see an elephant God statue. Enjoy the architectural splendors around and take a long walk along the banks of the Tungabhadra River. After visiting Virupaksha Temple, you proceed to visit Vittala Temple, which exhibits the architecture of Vijayanagara Empire. Travel back to Hospet for lunch on the luxury train. Take rest and again get ready to explore Royal Center at Hampi. The center constitutes of courtly and military structures that were once the citadel of Vijayanagara Kings. Thereafter, you visit Queen's Bath (ancient-royal stepped tank), Mahanavami Dibba or great platform, Hazararama Temple, Queens Enclosure along with its Lotus Mahal and the Elephant stables. As soon as you are done with exploring in and around Hampi, get back to Hospet Station to board Deccan Odyssey. Dinner and overnight stay onboard as Deccan Odyssey progresses for Hyderabad.
Overnight at Deccan Odessey

On day five, Deccan Odyssey enters Hyderabad, which is famed as the royal city of Nizams. Formerly, Hyderabad was named after Bhagmati, who was the Hindu wife of Muhammad Quli Qutb Shah, later changed to Islam religion with a name Hyder Mahal. Take your breakfast and proceed to visit Golconda; the epitome of Nizami culture and grandeur. It is a mud fort which became the seat of Qutub Shahi dynasty. Return to the comforts of the luxury train for lunch and some rest. You may also stroll around the vibrant bazaars of Hyderabad, where you can put your hands on shopping articles such as pearls, lace bangles and ittars. During lunch time, savor the popular food of Hyderabad, mouth-watering Biryani. Later, you head to explore the Falaknuma Palace.
Overnight at Deccan Odessey 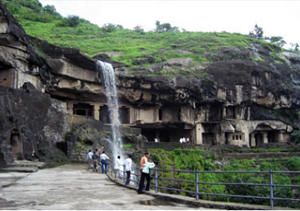 The Deccan Odyssey arrives Aurangabad this morning. The city has been named after the last Great Mughal emperor, Aurangzeb. Because of the same, one can spot major Mughal influences in every nook and corner of the city. Aurangabad is home to a UNESCO World Heritage Site, Ellora Caves. Have your breakfast and then drive towards the exceptional Ellora Caves. The caves are considered one of the finest examples of cave-temple architecture in India. The site includes 34 rock-cut caves that represent Hindu, Buddhist and art that dates back to the 4th to 5th century AD. There are 12 Buddhist caves to the south, 17 Hindu caves in the center, and the 5 Jain caves to the north. The most important attraction of the caves is the Kailash temple. The temple is believed to be a replica of Shiva's celestial abode on Mt. Kailash. Get back to the Deccan Odyssey for lunch. Have a look at the picture perfect landscape of Maharashtra and its surroundings. Sit back and relax for the evening. Savor your favorite cocktail along with luxurious dinner. Take some rest as Deccan Odyssey proceeds towards Jalgaon. Dinner on board & Overnight stay on Deccan Odyssey.
Overnight at Deccan Odessey 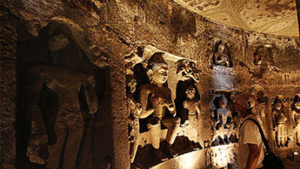 As you enjoy your breakfast onboard, the Deccan Odyssey arrives at the Jalgaon station. Disembark and drive to the Ajanta Caves, another UNESCO World Heritage site. The site of Ajanta Caves includes 30 rock-cut Buddhist caves that have been beautifully carved. All the caves feature sculptures and paintings of Buddhist religious art. Savor lunch onboard the Deccan Odyssey. After having your lunch, disembark and pay a visit to a Mahatma Gandhi's memorial, who was one of the most important leaders of the country. There is much to learn at the Gandhi Teerth that pays honor to the man who walked on the path of non-violence. The man who quoted "My religion is based on truth and non-violence. Truth is my God. Non-violence is the means of realizing Him." In the evening, enjoy a sun downer while watching the real beauty of rural India. Have dinner onboard the Deccan Odyssey as the train leaves for the last stop, Mumbai.Dinner on board.Overnight stay on Deccan Odyssey Luxury Train
Overnight at Deccan Odessey

This early morning, have your breakfast and then disembark at Chhatrapati Shivaji Terminus, Mumbai. Say goodbye to the Deccan Odyssey as your luxurious journey comes to an end.

NOTE: -
PRICE FOR A DELUXE CABIN ON TWIN SHARING BASIS.

Cost Does Not Include :